Yes, 22 years ago a handsome Army officer walked into C.I. Shenanigans and it was all over after that.....

Many of you are way to young to remember, but Shenanigans had a dance club above the restaurant and i would occasionally go on ladies night with my girlfriends.  Well my friend Ginger, doesn't that name sound like trouble, convinced me to go out on a Wednesday night after work i am so glad she did.  Jeff showed up with his officer buddies around 10 pm after water skiing and friends, he made my heart skip a beat and i thought he was about as handsome as they come.  I remember telling Ginger, "If i ever asked anyone to dance, (which i NEVER would) it would be him.", as i pointed Jeff's way.  My friend LOVED to dance and left me to go ask his cute buddy to boogy.  Before i had time to feel sorry for myself about not having enough gumption or was it morals to ask Jeff to dance, because all i could hear was my Mom's voice going through my head...."You never ask a man to dance.  You make them come to you.", Jeff magically appeared and asked me out on the floor.  He started to speak and that southern accent reeled me in quickly.  We shook our groove things a little more, chatted, and all of a sudden the bar was ready for last call.  Jeff asked for my phone number and i was hesitant because....well, i was still kind of seeing someone....more or less.....and it was a little overwhelming to have someone so handsome want to call me! :-)  So i took his phone number with no intention of ever calling him because.....there again was my mother's voice in the back of my mind...."You never call a man first."  Ugh....torn for two weeks of wanting to see him again, i finally asked my friend Ginger to go out for ladies night again in hopes i would see Jeff.  And i did, but guess what?  He blew me off.  Played a little hard to get, but finally gave in and danced the night away with me.  We closed the place down and his pick up line came, "We live on American Lake and have a boat.  Want to come over and go water skiing?"  Friends, for those of you that know me well, i am not a good swimmer and i am definitely not a water skier.  Why didn't he just say, "Want to come over in your bikini and lay on our dock?"  But guess what i said?  "SURE!"  I actually ended up taking him home that night because he lived within minutes from my Mom's house.  We walked down onto the dock at around 2 am and talked until 5 am.  He had to be at PT in an hour and i had to be to work in 5 hours.  Oh my....dead to the world but so worth it.  I ended up going to his place that weekend and water skied, even got up on my first try.  He had no idea i was petrified, i faked it well,  tried to impress him all in the name of deep like and to be honest a little lust as well. :-)  I survived and must've passed with flying colors because i was invited to a party he and his buds were having down on their beach with a live band.  Not sure how many times the cops came to tell them to pipe it down before bringing the party to an end.  I continued to hang out and the crowd had dwindled to only a few.  Before i knew it, George Michael was playing on the stereo and Jeff and i were slow dancing on the beach by the bon fire.  Southern accent got me at the club, slow dancing on the beach sealed the deal...i was smitten.  We were pretty much inseparable after that.

Five months later he was headed to Desert Storm for a quick 5 month deployment...okay it was an eternity to me.  And the silly girl i am, i was hoping the distance would make him realize that I WAS THE ONE!  No, instead he returned from war and decided he was going to get out of the Army all together and didn't want to make any promises he couldn't keep to me.  Well, by the Grace of God, he was accepted into a local masters program and ended up staying the area.  I am claiming school as the big reason why he stayed in the area, but i am too hoping i was a little bit of that deciding factor since he was all the way across the country from his family in North Carolina.  Surely he could've returned to them, but no....he chose the Northwest and a little local girl to make his new transition in life.

We officially moved in together.  YES, we lived in sin.  Now that is out of the way!  Started attending church together and after 2.5 years of dating he came to his senses and realized what i had comprehended after our dance on the beach...i was the one.
He surprised me on my 24th birthday.  We were poor and broke and i had received free tickets to the Nutcracker in Seattle.  We splurged on dinner and used our Entertainment coupon to eat at the Space Needle.  You see, i've always been thrifty. :-)  Had a lovely dinner and then we were asked us if we wanted dessert.  Feeling short on time, i declined but Jeff convinced me it would be alright.  I remember watching a server walk buy with a dish of dried ice and thinking, cool, what on earth is that.  All of a sudden the 'what on earth is that' was in front of me and Jeff was down on one knee asking for my hand in marriage.  My engagement ring was perched in the dried ice and i all of a sudden i was saying yes and we were hugging and crying and cheers were coming from the crowd at the restaurant and friends....that was one of the best nights of my life!  What made that night even more amazing was, i found out from my sister the next morning that Jeff had come to my Mom and asked for my hand in marriage before we headed out to dinner.  A southern gentleman all the way!

We planned for 6 months, okay, i planned for 6 months and he was a good groom and just showed up on time.  And i won't lie, i envy the brides who have Pinterest now for all of their wonderful creative ideas but i look back and still love everything about our wedding.  We planned it all ourselves, no wedding planner and we paid for the entire gathering with out going into any type of debt at all.
We rested for a couple of days before heading our to Cabo San Lucas Mexico for the first and time and we fell in love immediately. It is still our absolute favorite places to relax with our girlies.

19 years later, i realized after doing a marriage study with our small group that Gary Thomas taught me was that, Jeff is my 'Sole Mate'.  What is that?
A biblical sole mate who walks in this truth, who daily travels God’s journey of sacrificial love, and who willingly goes “into training” for godliness is a far more stable foundation upon which to build a lifelong partnership than the thought of the philosopher Plato. “Greater love has no one than this, that one lay down his life for his friends.” This may not sound like the most exciting or emotional love, but it is certainly the truest love.
Marriage is a journey....Jeff is the only Sole Mate i want to be on this journey with.
Life has not always been easy.  We've had our fair share of ups and downs, and the biggest was most definitely the loss our boys Andrew and Benjamin, 13 years ago.  It rocked our world.  This could've of easy torn our marriage apart but i know our foundation on God is what kept all of the pieces together and He carried us and still does and brings us back time and time again to that place of remembering why we fell in love with each other.

Love you Jeff Allen, love the God fearing man you are, the husband you are and especially the example of how a man should treat a woman to his little precious girls.  They are blessed to have you as their Daddy and i am blessed to be called you wife.
Looking forward to many more years of love and joy with you! 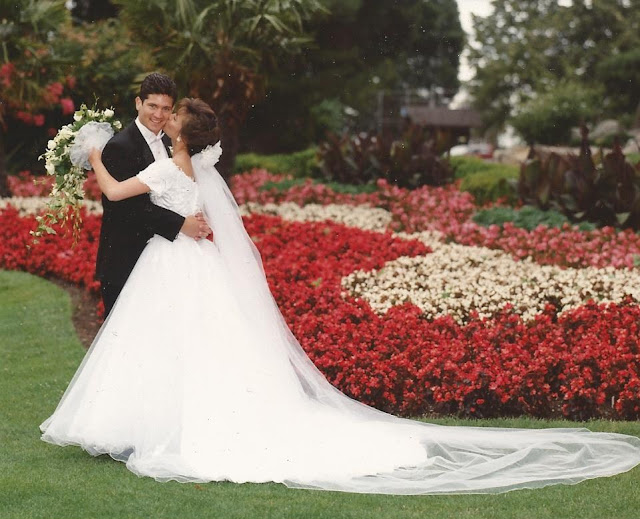