One of our favorites.  I picked up this yummy recipe from E.R. Rogers that was once in the sweet little town of Steilacoom.   They usually made it with halibut but i've made it with any variety of white fish, such as orange roughy, cod or tilapia....it all tastes good to me!  Besides being so delicious, it's easy-peasy-lemon-squeezy as well!

Place your oven on broil.

Sprinkle a dash or salt and pepper on your fish then broil for about 7 minutes on each side or until done.  Remove from oven then change your oven setting to bake and position to 350 degrees.  Place a thick layer of sour cream on top of fish followed by a layer of shrimp to your liking.  I like mine to cover the entire fish.  Sprinkle with green onion and then cheese.  Again, these as well can be to your liking...a little, a lot...it will all taste wonderful.  Place back in the oven for about 5 minutes or until cheese is melted.

If you want to add a little more flavor and fat, you can add melted butter to your fish before you broil it.

My girls love this, green onions and all!  Enjoy!

Can you believe our baby is 5?
This happened on the 22nd and the celebrations are still going on.  As i type, she is out on a date with her Daddy.  He takes the girlies out for their birthdays to dinner and activity of their choice.  Lily chose to have dinner at the golf course...yes, her standards are high and then she chose bowling as her venture.  Hmmm....golf course dinner and bowling do not really match up but i love that she is well rounded in her choices. :-)

All birthdays start off the same, special birthday donut and then the evening brings dinner of their choice.  Red Robin was what she had a hankering for and it was a good thing because we ran into some our most favorite people in the world.  Future son-in-laws and in in-laws....the Stewarts!  Surprisingly, this crazy girl who will take a running leap onto a sled in the apple orchard when it snows was terrified of the robin that night.  What is up with that?  We reminded her that she would have to sit in the hotel room with a sitter the next time we went to Disneyland. :-)

The following day, we PUMPED IT UP at Pump it Up with all of her buds from school.  Don't have a lot to say except that it was FUN and GREAT!  What is not great about a party that is not at your home and someone else cleans everything up?  The pink cheeks and smiles prove that Pump it Up does not disappoint.

I am still sitting here wondering how our baby is FIVE!!!
Let me share briefly with you how our miracle number three came to be.


January of 2006, the three of us were watching American Idol.  I kid you not!  Do you remember Bella's birth story?  Check out the link, you will see why American Idol is so significant.
This time our friend who volunteers at the Crisis Pregnancy Center gives us a call.  Her name is Joyce…..our attorney’s name is Joyce.  I know, it is so hard to believe.  So when I say, Hi Joyce….it is like deja’ vu…….
She said a women had come into the center 2 weeks ago asking how she would go about giving her baby up for adoption.  My friend proceeded to tell her that they could refer her to an agency.  The woman declined that offer and then said, you honestly don’t know of a couple who would be interested in adopting my baby.  My friend said, of course she did but she had to follow the rules of the center and that was to only refer her to an agency.  The woman then proceeded to give my friend her phone number and said if she thought of anyone to give her a call.  Now if you knew my friend, she is not a rule breaker in any way shape or form.  But this woman tugged at her heart.  So much so that she prayed about her for two weeks and then decided to give us a call.
Again I am swooped in by this sweet dear woman, divorced mother of 3, who had a one night stand with her next door neighbor.  If you ask her how and why.  She will tell you, 'temptation of the flesh got the best of her one night'.  Bless her heart.  She knew instantly she was pregnant but in denial…denial for 6 months.  Another pregnancy with no early prenatal care.
We had no idea what she was having but I have to be honest we were thinking that maybe this was our chance to have a boy.  Our birth mother shared that the birth father was 6’4, 230 lbs and ½ African American and very athletic…..we instantly thought…..wow, this could be our big stud of a boy!  Silly, I know!  So I courted our potential birth mom for about a week, while she was interviewing other possible adoptive parents when she revealed that she did not want to contact the birth father.  Whoaaaa…….everything instantly changed.  Even though we wanted this baby more than life itself, we knew in our hearts God would not bless this union if we did not contact the birth father.  He too had every right to parent this child….even before us.  Our birth mother then “unchose” us.  It broke my heart.  It was like we had this fast furious love affair for a week because we literally talked on the phone for hours each night, getting to know each other, to breaking up a week later.  She said she would be calling the other family in the morning.  I remember crying and praying to God that I would not be tempted to call or bother her and if she needed me for anything, to have her give me a call.
About 12 noon the next day, I receive a call from her….hysterically crying.  I could hardly make out what she was saying but I finally realized she was trying to tell me that she had made the wrong choice.  That she indeed wanted Jeff and I to parent her child.  We then decided to meet for dinner that night.  We wanted to make sure that her choosing us again would mean that we would still have to contact the birth father.  She wasn’t thrilled but she too knew in heart it was the right thing to do.
A few weeks later she called him and he was definitely caught off guard but gracious.  He took responsibility right away for his actions but agreed that giving the baby up for adoption was the best choice.  He signed off his parental rights immediately.  We then moved forward with the adoption process and long overdue ultrasound.  Jeff was able to join us for this ultrasound…..i think more out of hopes that he would be the first to witness the possibility of having someone else join him on his blue team.  Well he was definitely the first to witness….the first to say….it’s a girl…. even before the ultrasound tech did.   He deflated for one moment and then perked right back up.  I had to giggle……his dreams of blue had faded and he was back cheering for the pink team.
March 22nd, 2006, Lillian Hope entered the world.  Our third precious daughter and miracle from God.  Do you know the meaning of 'hope'?  It means a desire accompanied by expectation of or belief in fulfilment.  God is so good...even when my hope faded, His never did.  He fulfilled our desires and dreams to have this family, this perfect little trio of girls, meant just for us. 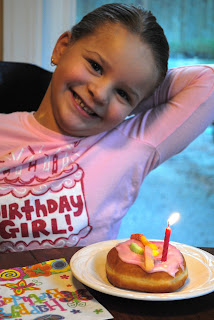 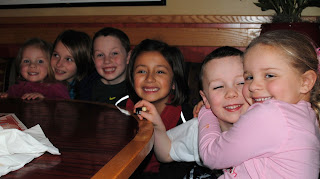 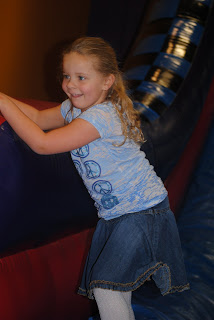 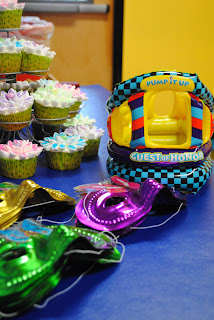 What a jam packed full of fun weekend!

Started off on Friday night with the girls having a school social at Wheelz.  They are not the best of skaters but that doesn't seem to phase them a bit.  They love going to hang out with their buds...they're kind of social in that way...hmmmm...wonder where they get that from?  I pulled them around the rink and made them fall a few times but isn't that how you learn to skate? :-)


Saturday i was blessed to attend one of the most special baby showers ever.  You see, this is for a 'rainbow baby' who is to arrive in May.  I met Reagan's sweet Mamma Jodi through being a Bunco sub for the neighborhood across the way.  We then connected on a closer level because she and i have something every unique in common....we are both loss Mommies.  Her sweet Anderson came silently into the world a little over a year and half ago and her arms have been waiting to be filled with another baby ever since.  Her wishes are soon to be granted and we celebrated the anticipated arrival of this newest blessing from above.
Jodi is the daughter of my wonderful running partner Wendy and sister of my other wonderful running partner Amy.  Not only did i get Jodi in my life but Wendy and Amy as well....really...how did i get so lucky?
Amy threw an amazing shower for her sister whom you can tell she LOVES very much.


As fun as my weekend has been, TODAY topped it all!
I climbed 69 flights of stairs, took 1311 steps and was in 788 feet of vertical elevation...all in the name of cancer....because i want to help find a cure for the stinkin' disease!
Today i did the Big Climb at the tallest building in Seattle, the Columbia Tower.  It is a fundraiser for the Leukemia and Lymphoma Society.  It was hard, but not nearly as hard as the fight people go through who are battling this disease.  It took me 15 minutes and 3 seconds to climb those stairs....that is nothing compared to battle people are afflicted with every day when they have this awful ailment.
Thank you for your love and support....it's what took my legs to the top! 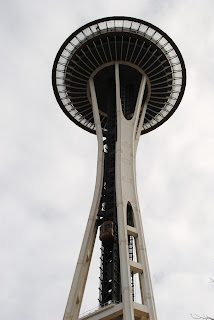 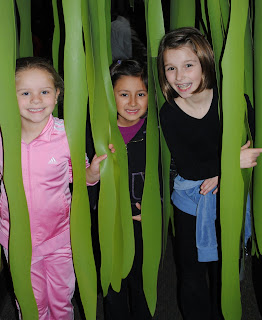 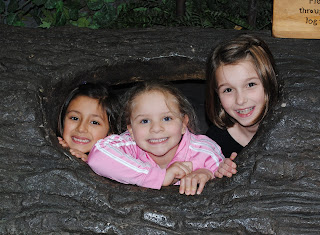 Don't you love holidays that make you want to dress up?
The girls were so excited to wear green even though i think they secretly like to be pinched. :-)
Felt a little wild this morning and made green eggs and decorated their already sugared up cinnamon rolls just a little more because that's what silly holidays make you do.  Lily, the child who loves any type of food quickly turned up her nose at my green eggs until she tasted them and then proclaimed that they were the BEST eggs she'd ever had and could we eat them every day.  She then asked, "How did you make them Mommy"?  Me, "A leprechaun helped me".  Loved the look i got from that one, cause she believed it! :-)

Our girl Grace can be the most impatient child in the world but can be the most patient child when she is surrounded by clover.  She found two four leaf clovers at school today.  My friend Jenny said, "I need to have her buy me a lottery ticket".  Hmmm.....i think we just might do that! 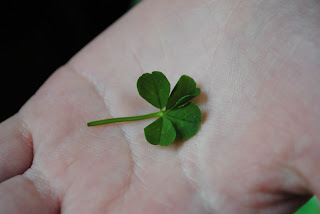