Straight from Heaven and now she's 7!

How can it be?
If you know Bella personally, you know she is about as sweet as they possibly come and oh so beautiful, inside and out.  I can hardly believe i have been her Mommy for 7 years now.

Let me share with you how God chose Jeff and I to be her Daddy and Mommy....


December 2003 we are working on our yearly goals and Jeff reminds me we are not getting any younger.  What are we going to do about expanding our family?  We both still felt the tug of foster adopt so we prayerfully decided that was the route we were going to go down.  Started the paper work up again at the end of January and called our social worker and left her a message on Friday, February 14th, 2004.  I told her what we were going to do and not to talk us out of it, just update our home study and call us when it is complete.  Why i say 'talk us out of it', is because i had called her August wanting to move forward with foster to adopt but she thought it was not a good fit for our family at the time.  She asked if we could think about it for six month.  So we did.  On Tuesday, February 18th,  our social worker left us a message, laughing and saying she would go ahead and update our study.
That same evening, Jeff, Grace and I are watching American Idol and the phone rings at 8:30 pm.  I answer and it is our attorney who did Grace’s adoption.  Mind you, we had not spoken with her since Grace’s adoption was finalized and that was when she was 3 months old….she was now 2 ½.  My first instinct was, wow, what a surprise but then I got a lump in my throat, when she was not able to get out what she wanted to say on the phone.  I went into panic mode and thought….oh no, the only reason why you would call this late and out of the blue is because “they” want her back….as in Grace, back to her birth family.  I got tears in my eyes and looked at Jeff and he was beyond puzzled.  Finally our attorney says that she just talked with our social worker, they actually talk on a daily basis regarding adoptions they are working on together and she said that she had told her the Allen family was ready for baby number 2.  I said yes we are!  She then proceeded to tell me that a baby girl had been born that night and would we be interested.  I of course said yes without asking Jeff. :-) She then went on to say…..But there is another couple in front of you.  I said…."Then why are you calling us"?  She said, "Because I am 90% sure they will say no"…..again, I say, "Then why are you calling us"?  The birth father cannot be located and the other couple likes things black and white….no grey matter.  I again, without consulting Jeff or any hesitation say that is not a problem for us.  She then says she will call after 9 am tomorrow to let me know what the other couples decision is. Do you think I slept a wink that night?  No….i was a wreck and Jeff was cool as a cucumber.
Our attorney calls at 9:12 am the following day….."How are you doing"?  Are you kidding me?  She has no news yet but wanted me to know that she wanted to touch base with me. She would call as soon as she had some news.  I had to get out of the house by then.  I called my sister and we headed up to Ikea.  I remember walking around, wondering if I was going to need to buy another dresser when my cell phone rang.  It was our attorney and she said, You’ve been picked by the birth mother.  When ….How?  We hadn’t even met her.  She said we would need to come to the hospital around 5 pm to meet our new birth mom and baby that night.  My world was spinning!
Let me tell you though.  We walked into a very sad situation.  Our new birth mom was not quite 17 yet and had not told anyone she was pregnant until she gave birth.  Her parents were both in shock and I think a little embarrassed but sad too that their daughter endured being pregnant for 9 months alone.
So we have to walk in trying to sell ourselves that we are the perfect match for her baby.  It was very difficult.  No one was smiling….even I could hardly smile.  Our joy was someone’s sadness.
Finally our attorney asked if we would like to see the baby.  YES!
I had no idea what to expect.  We never asked the ethnicity of either birth parents.  We walked into the nursery and saw this perfect little being with this jet black hair that stuck straight up.  She seemed so itty bitty at 6lbs 4oz but so amazingly exotic and beautiful.  We then find out she is half Hispanic.  I remember thinking….is this really going to happen and then Jeff walked over to her and placed his big finger in her tiny little hand and she grasped on and he said, "Hi little girl….i’m your Dad".  That’s when I knew that God had truly given us another miracle.
Faith Isabella…. Our Bella was born on February 18th, 2004 and we brought her home on February 21st.  Hebrews 11:1 says  'Now faith is being sure of what we hope for and certain of what we do not see'.  Really and truly, the shortest pregnancy ever.  Do you know how much fun it was to show up at church that Sunday with a new baby?  Everyone asked who we were watching….and I just stood there and smiled and then we would all begin to scream.  Really, not much worshipping done on my part but a lot of praising God.
Bella, i love everything about you and i feel so honored and blessed that God chose me, ordinary me, to care for you and call you mine.  Love you Bell-Bell! 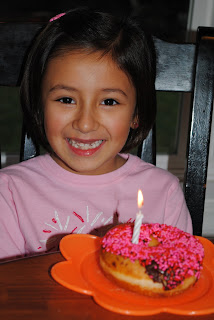 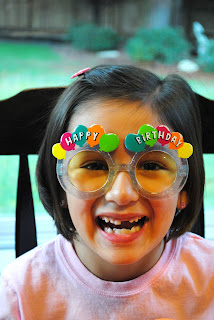 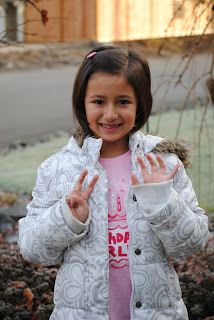