We used to LOVE pink in our home until Grace pretty much banned anything pink from her wardrobe two years ago.  It wasn't only her clothing, school supplies are what started all of it.  No more pink pencil boxes, pink folders or pink scissors.  The only reason why she agreed to 'pink' erasers was because it was printed on the school supply list otherwise she would have found another color to replace those as well.

But....nobody can resist the nasty roached out pink wig that we've had since Grace was four.
She was watching that silly show Lazy Town one day and the main character Stephanie has a cute pink bob.  Grace thought that was the coolest thing she had ever seen and begged for pink hair after that.  Well we all knew that was not going to happen until she moved out on her own and paid for it herself, so she had to settle for the pink wig i found on Ebay.

Lily found the pink hair headband catastrophe at the Dollar Tree and as you notice, it has seen better days but it will still bring a good laugh when you need one. 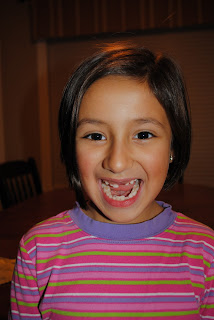 And the biggest excitement for the night!
They were all tucked in bed and within 5 minutes Bella was screamin', Lily chimed in since they share a room and of course that got Grace out of bed.  Bella lost her top tooth that was barely loose when she came home from school today.  They are falling out left and right!  Let's hope the tooth fairy remembers to come tonight because she blew it the last time!  Oooops!
Posted by SuLee at 9:06 PM